Hooray! What a prestigious, glorious event!  Of course I am talking about the annual Thunderbird Rugby Invitational hosted at Thunderbird School of Global Management. This year’s tournament involved a new, much more competitive group of clubs from the Phoenix area due to limited availability by traditional participants. In addition to the Thunderbird RFC squad, Phoenix RFC, Camelback RFC and Red Mountain RFC all made an appearance. The tournament was round-robin style and kicked off at 10am on Saturday, Nov. 9.

The tournament began with a very solid Red Mountain team, who ended up making quick work of an undermanned Phoenix squad. The second and third matches of the day featured Thunderbird RFC in a back-to-back scheduling error against the host team.  First up, Thunderbird took on a strong Camelback team and played very fundamentally strong rugby. The scrums were dominated by the blue and white, encouraged by outstanding hooking from Veteran Luis Vidal and Rookie Colin Agnew. Rookie back Nikhil Nair excelled throughout the day with great tackles, beautiful rucks, and the first try of his young career when he chased and pounced on a grubber in the try zone. Successful conversions on all tries by Rookie forward Bryce Jahner helped secure the win as Thunderbird was victorious 28 – 14.

After a ten-minute break, Thunderbird was back on the pitch against Phoenix RFC for a war of defensive attrition. A relatively young, inexperienced group started the match to allow others to catch their breath. A brave showing on defense by the new ruggers and a quick thinking try by President Jay Stahlman had Thunderbird up 7-0 at half time. In the second half, Thunderbird came out strong to dominate a Phoenix club depleted by injuries. An iconic, full-pitch sprint try by Veteran Steve Preator and a great, flowing try capped of by Rookie Nikhil Nair on the wing helped the club solidify a 17-10 victory just before lunchtime. 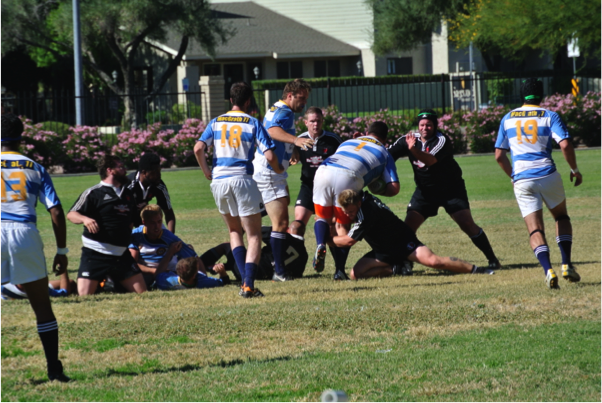 The next match saw Red Mountain defeat Camelback, which meant that the final match of the day (Thunderbird vs. Red Mountain) would determine the winner of the TRI Cup. The Phoenix squad was forced to forfeit their final match against Camelback due to injuries, so the grand final kicked off at 3pm.

Thunderbird kicked to start the match, but jumped out to a 12-0 lead thanks to a fortuitous scrum and some friendly refereeing. However, Red Mountain, being the most experienced side at the tournament, did not back down from the challenge. They strung together two impressive tries with some very good play out wide to take the lead in to halftime at 14-12. The second half saw some incredibly scoring plays thanks to some mental errors and poor tackling from tired ruggers. With about 5 minutes left, Thunderbird was on the wrong end of a 26-12 spread when the unthinkable happened. We shot back with two consecutive tries, the first off a Red Mountain scrum that we won and immediately ran for a try followed by a one play try off the ensuing kick. Two conversions meant the score was all tied up at 26-26 with only seconds remaining. Unfortunately, the clock struck midnight on this Cinderella story when a Red Mountain winger back broke five tackles for the game-winning try on the last play of the tournament.

Despite the crushing defeat in championship match, Thunderbird was in quite good spirits at The Australian during the tournament social. It was an invaluable experience for a club that has grown by leaps and bounds this trimester and a significant building block on which to continue to grow when we pick back up in the Spring.

Before I pass the torch to the next leadership team, I’d like to take a moment to say thank you to my current group of leaders and all of the ruggers, supporters, and alumni who have made the Fall 2013 campaign a wonderful success. I believe the club is in a great position for future growth, both on and off the pitch, and I look forward to being an active member of the alumni association for years to come.